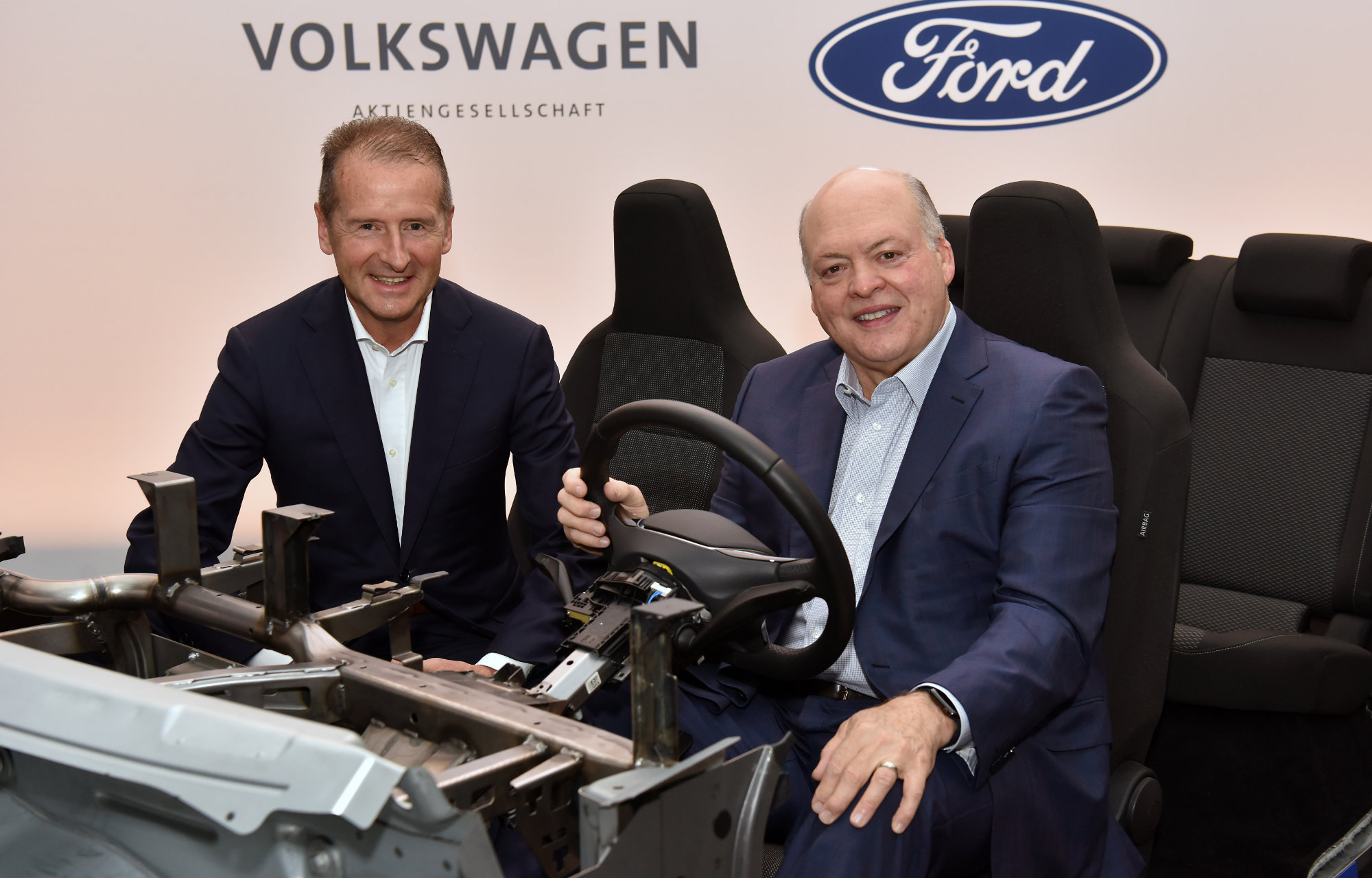 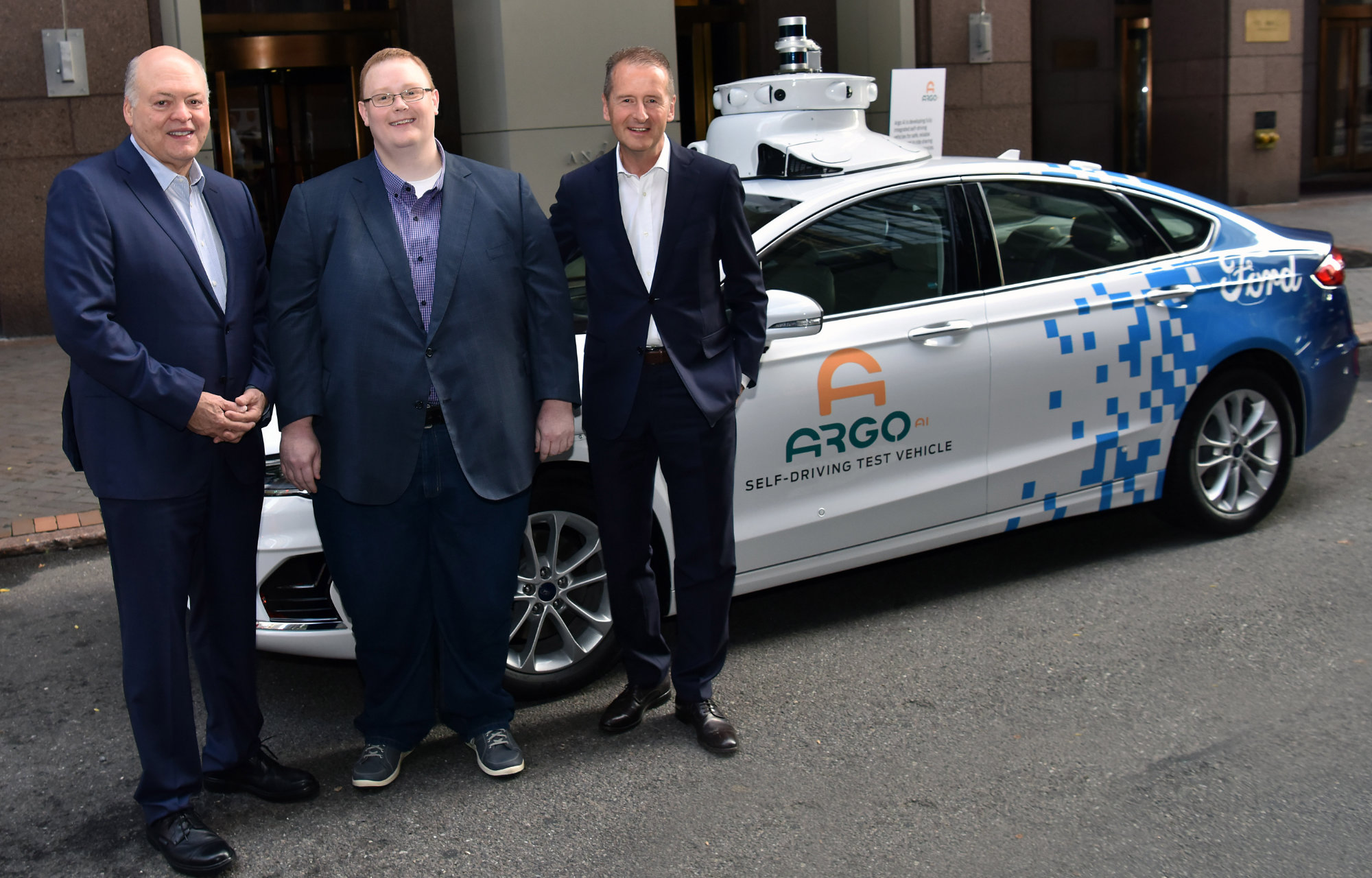 NEW YORK, July 12, 2019 – Ford Motor Company and Volkswagen AG today announced they are expanding their global alliance to include electric vehicles – and will collaborate with Argo AI to introduce autonomous vehicle technology in the U.S. and Europe – positioning both companies to better serve customers while improving their competitiveness and cost and capital efficiencies.

Working together with Ford and Volkswagen, Argo AI’s self-driving system (SDS) is the first with commercial deployment plans for Europe and the U.S. Plus, being able to tap into both automakers’ global reach, Argo AI’s platform has the largest geographic deployment potential of any autonomous driving technology to date. Volkswagen and Ford independently will integrate Argo AI’s SDS into purpose-built vehicles to support the distinct people and goods movement initiatives of both companies.

Ford and Volkswagen will have an equal stake in Argo AI, and combined, Volkswagen and Ford will own a substantial majority. The remainder will be used as an incentive pool for Argo AI employees. The full transaction is subject to regulatory approvals and closing conditions.

“While Ford and Volkswagen remain independent and fiercely competitive in the marketplace, teaming up and working with Argo AI on this important technology allows us to deliver unmatched capability, scale and geographic reach,” Hackett said. “Unlocking the synergies across a range of areas allows us to showcase the power of our global alliance in this era of smart vehicles for a smart world.”

Ford expects to deliver more than 600,000 European vehicles using the MEB architecture over six years, with a second all-new Ford model for European customers under discussion. This supports Ford’s European strategy, which involves continuing to play on its strengths – including commercial vehicles, compelling crossovers and imported iconic vehicles such as Mustang and Explorer.

For Ford, using Volkswagen’s MEB architecture is part of its more than $11.5 billion investment in electric vehicles worldwide – and supports Ford’s commitment to offer its European customers a broad range of electric vehicles while meeting its sustainability commitments.

“Looking ahead, even more customers and the environment will benefit from Volkswagen’s industry-leading EV architecture. Our global alliance is beginning to demonstrate even greater promise, and we are continuing to look at other areas on which we might collaborate,” Diess said. “Scaling our MEB drives down development costs for zero-emissions vehicles, allowing for a broader and faster global adoption of electric vehicles. This improves the positions of both companies through greater capital efficiency, further growth and improved competitiveness.”

The alliance, which covers collaborations outside of Volkswagen and Ford’s joint investments in Argo AI, does not entail cross-ownership between the two companies and is independent from the investment into Argo AI. The alliance is governed by a joint committee, which is led by Hackett and Diess and includes senior executives from both companies.

The companies also are on track to deliver medium pickup trucks for global customers, aiming to start in 2022, followed by commercial vans.

Volkswagen will invest $2.6 billion in Argo AI by committing $1 billion in funding and contributing its $1.6 billion Autonomous Intelligent Driving (AID) company, which includes more than 200 employees – most of whom have been developing self-driving technology for the Volkswagen Group.

As part of the transaction, Volkswagen also will purchase Argo AI shares from Ford for $500 million over three years. Ford will invest the remaining $600 million of its previously announced $1 billion cash commitment in Argo AI.

The full transaction represents a valuation for Argo AI that totals more than $7 billion.

Argo AI plans to work closely with Ford and Volkswagen to provide the autonomous vehicle technology the automakers need to deliver fully integrated self-driving vehicles that can be manufactured at scale for safe, reliable and durable deployment in ride sharing and goods delivery services.

“Argo AI is fortunate to have a world-class teamdue to our clear mission and the commitment to deployment from our partners, and together with AID employees, we will have a global workforce toattract even more of the best talent,” said Salesky, co-founder of Argo AI. “Plus, thanks to Ford and Volkswagen, Argo AI technology could one day reach nearly every market in North America and Europe, applied across multiple brands and to a multitude of vehicle architectures.”

Based in Munich, Germany, AID will become Argo AI´s new European headquarters and will be led by AID’s current CEO Karlheinz Wurm. With the addition of AID employees, Argo AI will grow from 500 to over 700 employees globally.

In addition to its global headquarters in Pittsburgh, Pa., the new location marks Argo AI’s first engineering center in Europe and the fifth globally in addition to Dearborn, Mich.; Cranbury, NJ; and Palo Alto, Calif. Collaborating with Ford, Argo AI also is testing its technology in Miami and Washington, D.C., where together they plan deployment of commercial services. 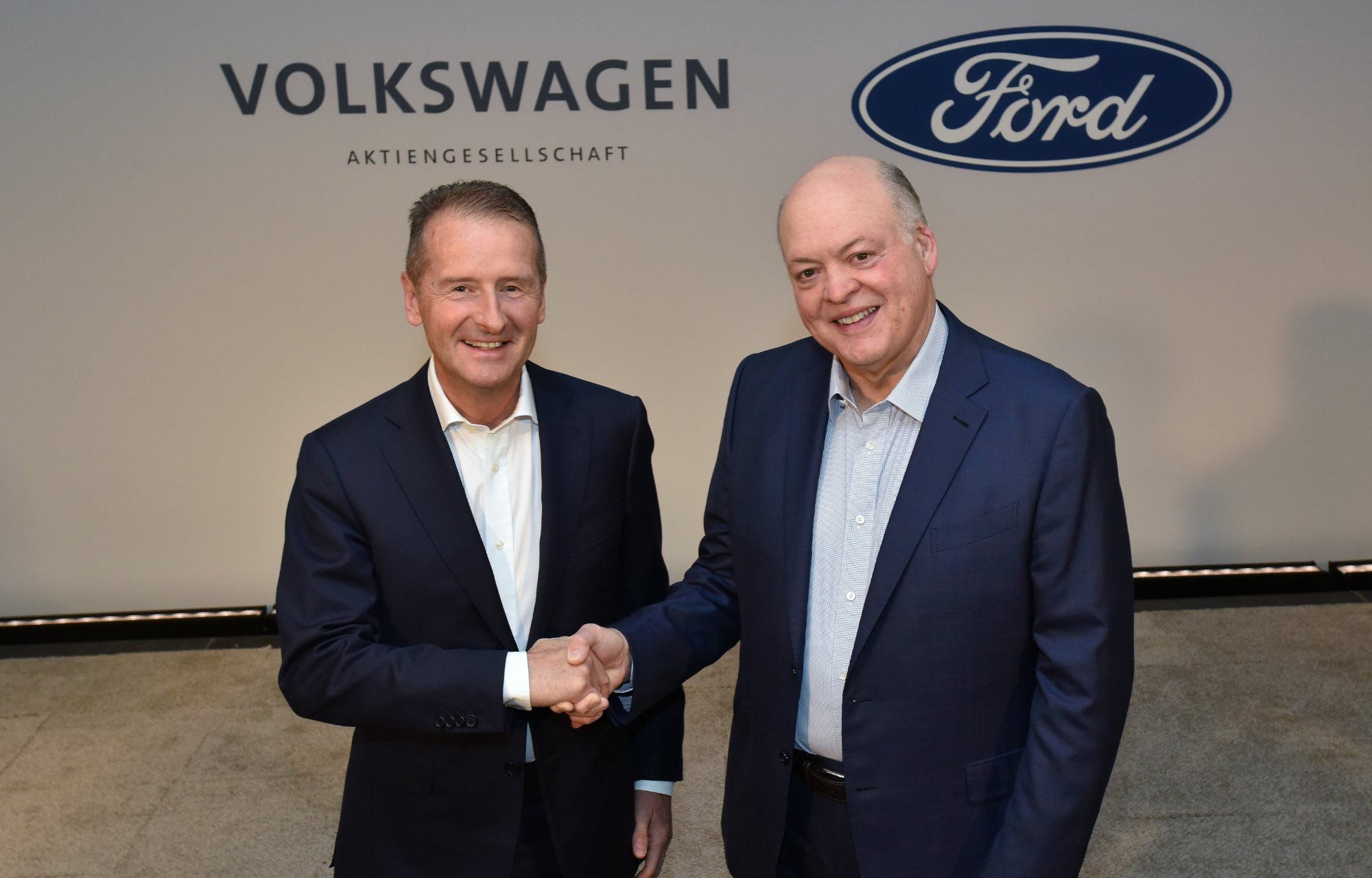 Ford to Use Volkswagen’s MEB Electric Vehicle Architecture for 600,000 Vehicles

Ford plans to design an all-new, MEB-platform-based EV model, which starts arriving in 2023, in Köln-Merkenich, Germany. Volkswagen will supply MEB parts and components as part of the collaboration.

Both companies also will continue to target additional areas where they can work together on electric vehicles – a key strategic priority for both companies as they drive to accelerate the transition to sustainable and affordable mobility.

The agreement with Ford is a cornerstone in Volkswagen’s electric strategy, supporting the growth of the e-mobility industry and facilitating global efforts to reach the Paris 2050 Agreement.

Ford and Volkswagen remain on track in their previously announced plan to improve their respective strengths in commercial vans and medium pickups in key global markets. The work on these vehicle lines will create significant efficiencies for each company.

Ford will engineer, source and build the previously announced medium pickup for both companies for customers in Europe, Africa, the Middle East, Asia Pacific and South America, with trucks expected to arrive in key markets as early as 2022.

Volkswagen and Ford have strong complementary commercial van and pickup businesses around the world, with popular models including the Ford Transit lineup and Ranger as well as the Volkswagen Transporter, Caddy and Amarok.

As both companies expect customer demand for medium pickups and commercial vans to grow globally in the next five years, collaborating on these key segments will allow better technologies and more innovation to reach their respective customers more quickly – with better plant capacity utilization.

Kontakt oss i dagKlikk her for andre nyheter